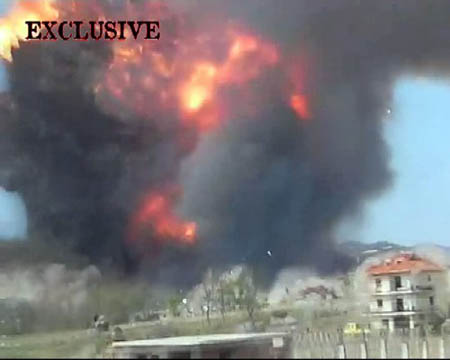 After the tragedy of Gerdec, there is a growing number of people and different sources protesting against the government as the one ultimately responsible for this human catastrophe. More and more details are coming about the entire story and about important aspects that could have spared the lives of some 13 people who died and those 300 others who were injured.

The MJAFT Movement organized another protest in front of the Prime Minister’s office today. Vora inhabitants (the town next to Gerdec) were yesterday and today out on the Tirana-Durres motorway protesting as well.

Meanwhile, majority of the media continue to report about the details of the mismanagement and pure corrupted deals that were made between the government representatives and the private Albanian entrepreneurs who ultimately brought about the death of innocent people.

I also learned about a website set up as a petition page where people could sign their name and leave a message as a sign of protest against Prime Minister Berisha.

Personally I am angered by this whole ordeal and the fact that it resulted from a sheer lack of care for human life and dignity in the name of personal profit. I have no doubts to the involvement of politicians, on both sides of the political sphere and have become even more convinced of the fact that this Albanian reality can only start to improve once many of these same politicians loose their political and social influence.