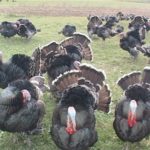 The New Year’s Dinner tradition continues to be one of the major times of the year when Albanians like to eat a lot and gorge themselves on all sorts of foods and drinks. Though it has diminished somewhat, I have to admit that this is true in my family as well. But most importantly, recently I’ve come to realize that some of the eating has another, more sentimental value to it.

My Dad and the Turkey

The other day my parents went out to do some New Year’s food shopping, and upon my return to the house I discovered that they had bought a large 7 kg turkey. As I looked at the massive amount of poultry meat that my dad was cleaning, I became even more cognizant of the painful fact that someone would have to consume it all somehow, though not me! So, respectfully, I asked my dad to explain how the turkey would be consumed since I was not planning on eating it, nor where the other members of the family, as far as I knew.

His answer was not what I expected. I was very aware of the fact that the main reason we had gotten a turkey, was because he had wanted it in the first place. I knew he enjoys eating the turkey meat. I had witnessed that fact on many New Year’s dinners, but the short explanation that he gave, shed much light on his persistence.

After I asked him, he immediately went on to tell me the story of how his own father (my grandfather) would buy two turkeys every year for his family. He would go back to his home village and get the live turkeys himself and then help prepare them for his whole family. Though I never got to see what my dad had seen his father do, I have gotten to see my father do the same for our family.

So, upon further reflection, I discovered that I had a distinct desire for turkey meat. That is why, I have decided that this year and in the years to come, I will help prepare the turkey because it’s part of my family’s tradition at New Year’s. Yes, I am crazy for turkey!