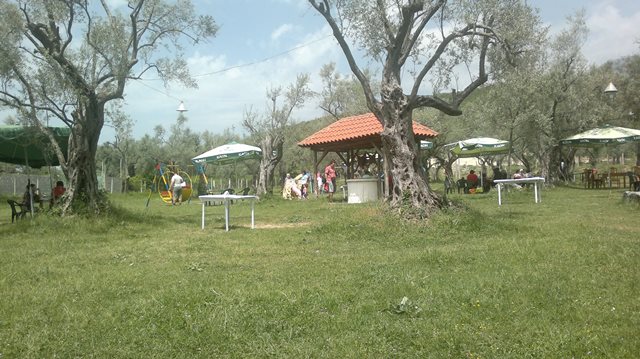 When I was going to university in the states, it was customary to try different places to eat. One of those places was a well-known chain of restaurants called the “Olive Garden”. The atmosphere was mainly geared toward married couples and average families with children, but most importantly a good place to eat.

Well, the other day, I discovered the Albanian version of the “Olive Garden” in Fushe-Dajti (on the foothills of mountain Dajti in Tirana). In reality, this restaurant was in no way similar to the type of restaurant I had found in the states, but very much like that in name and trees!

In fact, that was all I could think of comparatively as similar to the restaurants in the states.

In reality, it was more of a “picnic garden with olive trees”.

I cannot deny the fact that I enjoyed very much the ability to sit outside among the olive trees and general greenery. There were children playing everywhere and families eating on green plastic tables and chairs (much like a picnic).

I should disclaim that the food and service were rather unattractive.

The best thing about the place was the outside area where you could truly enjoy the  greenery and the olive trees.

For an alternative place to eat you can try the restaurant next door, which has been there years before this one, but rather closed and not very picnicy!