The Anti-Smoking Law has Gone up in Smoke – Completely 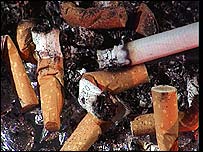 In two months it will be a year since the anti-smoking law came into force in Albania. At that time this new legislation was welcomed by most people. However, as you look at the current situation and the developments till now, you would have to admit that the antismoking law has gone up in smoke.

The main enforcing authority is the Ministry of Health, which as reported, has close to 200 inspectors all around the country. These people are responsible to ensure that the law is respected and those who break it, are to be penalized through fines and other legal measures. However, the inspectors have failed at their task completely. Meanwhile, they are paid about 10,000 Lek extra per month, for doing nothing. Basically wasting taxpayer money.

Today, if you visit the local bars or restaurants, you cannot help but get the stench of smoke on your clothes and body from people smoking near or around you. The situation is almost worst than what it was before the law was implemented. What is worst is the fact that you can often find people in health facilities like hospitals and clinics doing just that – smoking.

Moreover, the situation is not expected to change as local and central authorities are gearing up for the parliamentary elections coming up in June, and obviously this issue is not of major concern to them.

What do you think about this issue?