Exploring Albanian Culture and Language: The Culture of Coffee Drinking 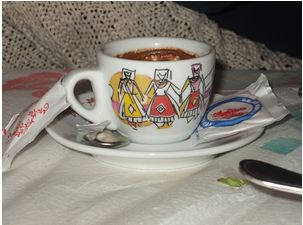 in Daily Life in Tirana, Guest bloggers on February 16, 2012

When I met last Friday with my friend John, working at Peace Corps in Albania, he made an astute observation that other Peace Corps volunteers had passed along to him about the difference of Albanian culture with the United States one: “In America, we build our relationships through work by showing responsibility for the assigned job first and in the aftermath of it we may develop a friendship, while in Albania it is important to develop first the relationship through coffee drinking time, then afterwards along the lines you do business.”

Although Albania is ranked 63rd for coffee capita consumption in the world (1.6 kg per person a day), the amount of time people spend in a café bar is in average two hours per coffee drink, while drinking at least two coffees per day: in the morning and evening. Albanians love coffee either espresso or Turkish. “You’ll see that whenever they sit to have a drink, coffee will be one of them. However, when an Albanian says: “Let’s go for coffee!” this does not necessarily mean that you’re expected to drink only coffee. It is just a saying. Also, if you are offered to go for a drink, usually the offer or will pay for you. Always ask permission to pay for drinks. Doing so without your Albanian companion’s knowledge can be offensive.”

Another Peace Corps volunteer named Corey comments: “I am not sure if I have already mentioned it but coffee is fundamental to Albanian society. Going out for coffee doesn’t always mean that you have to drink coffee but more often than not that is what people order. I enjoy the coffee culture here for several reasons. Going out for coffee several times throughout the day breaks up the pace of the day and gives you time to relax and talk. It isn’t great for productivity but it is good for relationships. For example, this morning a trip to introduce myself to the postmaster turned into a half hour coffee where I was offered a tour of the local castle and use of the post office computer when I want.“

Drinking coffee is very important in building proper relationships with government and business people in Albania. Since, the level of corruption is high according to Transparency International, Albaniais ranked 87 in the Freedom from Corruption Index in the Annual Report 2010 (See Table 1 below).

Very often the coffee times are associated with friendly day-to-day conversations about politics, economy and other media emphasis of the day, such as Big Brother Albania show, Money Drop, Who Wants to Be a Millionaire, Albanian’s Got Talent, Dancing with the Stars, etc.  Albanians, in their Mediterranean culture, solve most of their problems in the coffee bar and not in their offices.  They feel more at ease to talk and ask for advice around a relaxed time with an espresso rather than be confined by a power chair of authority. They like to gossip about the world’s problems: politics and economics, while at times they may hand an envelope full of money in a discrete way to government officials for favors in tenders or bids, unmerited employment, acceptance to universities, inflated grades, healthcare services, etc. Bribery is the prevailing organizational culture inAlbania.

Food is important in Albanian life. Usually after we eat, we drink a coffee or as it is known in Albanian “Kafe.” Albanian dishes have been heavily influenced by Turkey, Greece, Italy, Armenia, and Syria. Recipes have often been adapted and altered to suit American tastes. Albanians enjoy a variety of appetizers, soups, casseroles, pilaf, pies, stews, and desserts. Salads (sallatë) are made with cabbage, lettuce, onions, peppers, olives, and feta cheese.

Researchers in the United Statesstate that there are many newly found benefits to coffee drinking rather than the social time fun. “Data from the Coffee Research Organization and the National Small Business Development Support Center Clearinghouse show that coffee is the most popular beverage in the world, with more than 400 billion cups consumed per year. Americans alone, consume 400 million cups of coffee per day making the United States the leading consumer of coffee in the world. That is translated into four and a half thousand cups of coffee per second.” 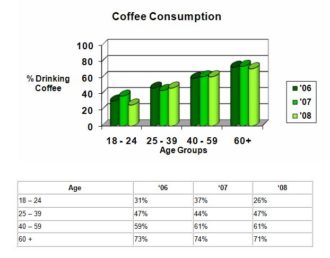 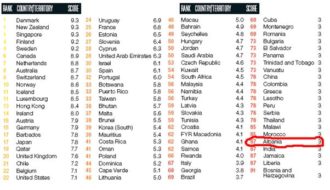 Although, United States are ranked in consumption of coffee per capita no. 27 in the world with 4.2 kg of coffee per person in 2009, behind Finland that is ranked no. 1 and consumes 12 kg per person.

In the past, coffee was thought to be harmful. “In recent years, some 19,000 studies have been done in an attempt to understand the risks or benefits of consuming coffee. While many studies have explored the connection between coffee and certain illnesses such as cancer and high blood pressure, no evidence has been found to link coffee to these health risks.“ What might be more surprising is that recent studies have shown that coffee can actually be good for you. This is good news for the people of America and for the Coffee Industry. “”Overall, the research shows that coffee is far more healthful than it is harmful,” says Tomas DePaulis, PhD, research scientist at Vanderbilt University’s Institute for Coffee Studies, which conducts its own medical research and tracks coffee studies from around the world. “For most people, very little bad comes from drinking it, but a lot of good.””

According to a study done by Scientists at UCLA and theUniversityofSouthern Californiaand reported on WebMD on February 19, 2009, the more coffee that you drink the less likely you are to ever being diagnosed with a stroke.

“This is not the only study to show that a higher intake of coffee can lead to better health. Another example is a study done by Harvard School of Public Health; and Brigham and Women’s Hospital showed coffee consumption can reduce the risks of type 2 Diabetes. Drinking 6+ cups of coffee a day may reduce the risk of type 2 diabetes by 54% in men and 30% in women. Coffee helps to increase your resting metabolic rate, which could help keep diabetes at bay.“

In conclusion, drinking coffee in Albaniais socially acceptable and is the basis for developing working relationships, while consumption per capita is higher in Nordic countries, as well as in America, compared to Albania, it seems that this cultures do not spend the extra socializing time that comes with drinking coffee. Albanians spend a lot of time sitting in a coffee bar and solve their day-to-day problems by voicing their frustrations and complaining as well as rejoicing over issues of life.  So, this is the way one has to work in Albania to share his business ideas by spending time for a coffee.

Received his B.S. in Biology, minors in Chemistry and Christian Philosophy from Oral Roberts University. Also, he received his M.A. degree in Business Management with a concentration in Organizational Change and Development. Recently also received his MBA degree from Regent University.