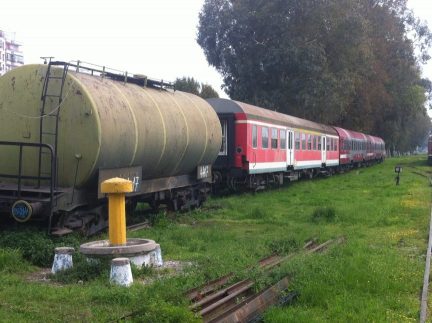 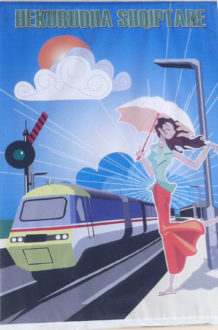 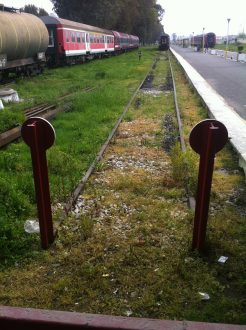 Let’s start with a dream and a vision.

From every corner of  Europe, in London, Paris, Munich or Vienna, people are boarding trains and, speeding through Albania and  some of the most inspiring countryside in Europe, arriving at a magnificent railway station  in the centre of Tirana at the top of a boulevard that sweeps  majestically down to Skanderbeg square. For foreigners, it   is  a wonderful first impression of Albania and for Albanians, a source of pride when returning to their home country. Albania has a twenty-first century  transport system and a railway station to be proud of.

Freight trains bring   goods produced in the factories of Kosovo and Macedonia to the port of Durres and from there to the world, creating  employment and revenue to the population of Albania. Both passenger and goods   rail traffic replace air and road travel which means   quieter roads and less pollution.

Now, let’s come back to the present.

European passenger trains don’t come  to Albania.  It is the only mainland European country not linked in the European  passenger rail network. The only one, that is, except San Marino (which had one in the past), and Andorra:  even the Vatican City has a railway link to its neighbour, Italy.  In fact Albania does have an international  rail  link – it connects with Montenegro, but only for freight.  Another dubious uniqueness and possibly the first in European railway history, the railway station was moved away from the capital  city. First,  the railway line from Durres terminated in Vore 17  kilometres short of Tirana and just over  half way – as from  2nd September 2013.

Later,  the line was extended, not all the way to Tirana, but  to Kashar about 7.6  km out of Tirana in May 2015. Not surprisingly ,  the number of passengers dropped from just under half a million in 2012 to just over a hundred thousand  in 2013 because the original   Tirana – Durres  line accounted for over 85% of total Albanian rail passenger traffic.   For the future, a new rail terminal ‘is planned’ in Laprake, a suburb of Tirana. Some point out it might have been  better to open this first before the old Tirana station was closed down.  In any case, it may never happen as the railways system is now collapsing fast and nobody seems to care.

This cynical attitude to the national railways   characterises the policies of a   succession of post-communist governments.

It was not always like that. The railways system as we know it was started in 1947 and completed in 1986. Up to 1990 it was the main form of passenger transport and almost everybody over the age of 30 remembers at least one   train trip in their younger days. There were few lorries  for commercial transport, some buses and almost total absence of private vehicles, so train travel was the obvious choice to get across the country.

With the growth of car ownership after the fall of communism, rail   passenger traffic declined, and with the gradual demise of local factory   production and primary goods extraction, freight transport by rail similarly fell.  This was   exacerbated by   a lack of government interest in   public services and any semblance of a national wealth creation policy.  According to Instat, in the thirteen years between 1993 and 2006 passenger traffic declined   by 60%: in the eight years between 2006 and 2014 it dropped by nearly  90%.

Successive under-investment has added to this. Lines, such as Librazhd to Pogradec were closed and part of the old line to Rreshen   covered over by  the road link to Kosovo. Erratic government subsidies which have ranged from over two and a half million Euros   per year down to half a million Euros per year has make planning the network impossible. In any case, even at its peak, government subsidies have not been enough to maintain existing service levels and halt the decline in rolling stock and the deteriorating condition of the railway. The absence of a signalling system and the poor conditions of the lines mean that trains are limited to speeds of between 25 and 45 kilometers per hour, which makes buses a faster option when travelling to other towns.

Not that there haven’t been  proposals  put forward to stop the decline, improve the railways, linking the system to Montenegro, Macedonia, and Kosovo and thence to the European network. An earlier study looked at the possibility of linking the network to Macedonia, Greece and Montenegro at a total cost of just over 500 million Euros, not taking into account any money pocketed by those who would be involved in its construction.

Another proposal in 2009 looked at a gradual improvement of the existing infrastructure of the Tirana- Durres line, the Vore-Shkoder line and Durres-Elbasan line at an estimated  cost of 237 million Euros, to allow for standard railway speeds at  160 Kilometers per hour. It was felt that with an improvement in services, travellers would flock back to the railways.

The construction of the Tirana- Rinas Airport Link was actually agreed with General Electric for €52 million in 2005, despite the misgivings of international organisations regarding the economic viability, procurement and debt sustainability.  After the elections,  a previous incoming  government cancelled the contract ‘on the grounds that it was too expensive’.  GE settled for  €14 million compensation from the Albanian taxpayer or the equivalent state investment in the Albanian railway system for the last 11 years.

Ultimately, there are three options, firstly to close the system down altogether, secondly, to keep it at its current level which would mean eventual closure due to rapid deterioration, and thirdly to invest. The latter has a number of further options ranging from investing  to maintain existing services and repair the lines to allow the trains to move at their present slow speeds to investing in an upgrade of  the existing lines to European standards and linking to the  European network.

However, any upgrades would most likely entail foreign investment, though it is difficult to see this happening given a  lack of transparency in how   money is usually  spent in such infrastructure projects. There also has to be  a reliable system of legal redress if things go wrong, There is also the propensity of new governments to cancel the projects of their predecessors regardless of the financial implications.

In the end, failure to take any decision will result in the second option. This will eventually lead to a total breakdown in the railway system and thus another opportunity to bring Albania into the twenty first century will have been lost.

Reproduced with kind courtesy of The Tirana Times www.tiranatimes.com